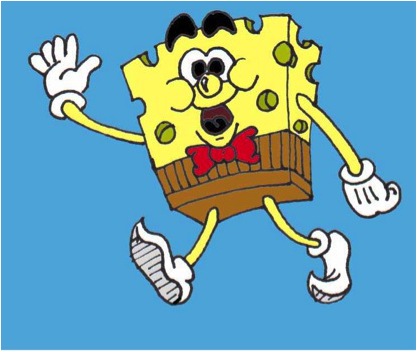 SpongeRob CubeJeans, an undeniably cut-rate SpongeBob SquarePants knockoff that was foisted upon a blanching public died Tuesday after an intellectual theft lawsuit filed by Nickelodeon.

After being destroyed by the power of the state, CubeJeans was sent back to his home in Zucchini Bottom to hang with dimwitted pal Potluck Star, where he passed away in shame and isolation, rarely even summoning up the energy to belt out those derivative songs of his.

Said the Snorks via press release, “He was one of us, and we will miss him greatly. Rest in peace, brother hack.”

Heathcliff, the inferior Garfield look-alike tearfully commented, “If only he had tweaked his thievery a few more notches away from the original, he would have fallen into that legal gray area shadowy operators like ourselves thrive in. Then he might still be here with us, tricking parents into buying his barely coherent movies by aping the color scheme of the legitimate SpongeBob DVD covers.”

Those wishing to give a donation in CubeJeans’ name can send their letters care of Squidroot at the Krunchy Krab.