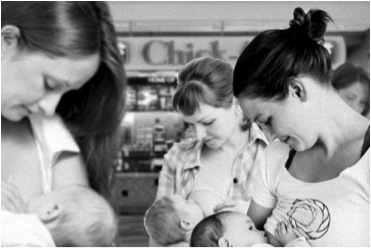 (THE GIST) – Angered by an incident earlier this week in which employees at a Knoxville, Tennessee Chick-fil-A asked a mother to stop nursing her 5-month-old daughter after other patrons complained, twenty courageous female freedom fighters brazenly entered the establishment Wednesday and staged a nonviolent tit-in.

Tennessee law states that breastfeeding in public is legal, so mother-of-two Jennifer Day was well within her rights to place her nipple between her baby’s pursed lips and begin excreting warm breast milk directly into its mouth, no matter how uncomfortable it might make customers trying to enjoy their vanilla milkshakes.

According to the coalition chair of the East Tennessee Breastfeeding Coalition Sherri Hedberg, “[The tit-in] turned out great. Chik-fil-A was very welcoming and accommodating, and it was kind of like a big party.”

Click here to see this article in THE GIST.